Big bag emptying stations are not among the most complex plant components, but nevertheless, handling of difficult products can be challenging. This includes, above all, bulk materials that tend to form extreme dust or are abrasive – or even both together. With the right concept, this can be achieved safely, efficiently and above all… dust-tight and wear-protected.

The emptying of big bags is essentially about two aspects: The easiest possible handling and emptying of the units (emptying function) and the transport of the raw materials to the production process (distribution function).

And as with all components for handling bulk materials, big bag systems must also be adapted to the properties of the product to be processed and the customer’s process environment in terms of equipment and function. Engelsmann customers have access to a wide range of components that can be combined with each other to create a turnkey system that meets their needs: Discharge aids, screw conveyors, conveyor belts, rotary valves or other conveying and dosing equipment. 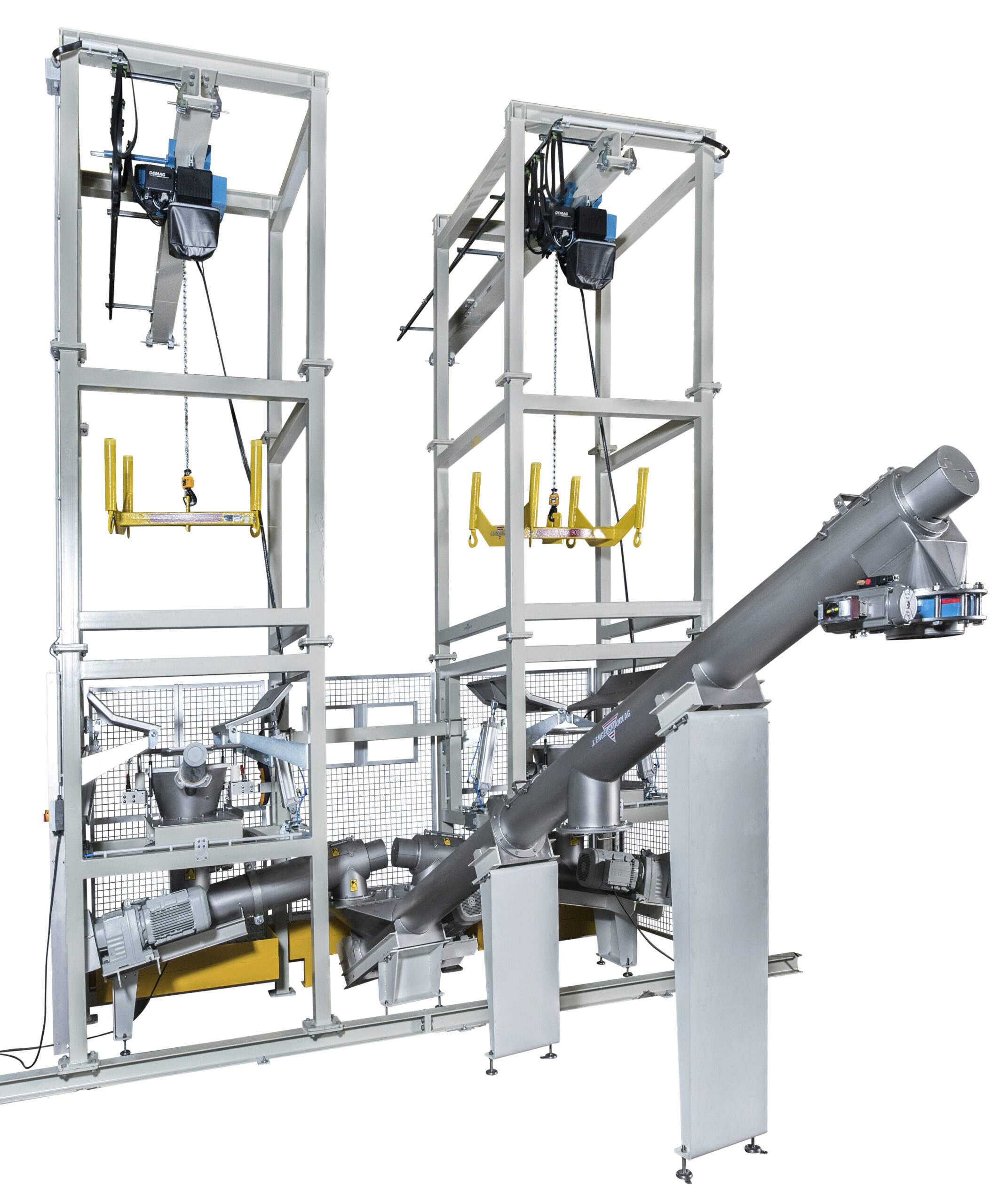 Compact and dust-tight: Big Bag emptying system and conveying as a closed system.

The tyre manufacturer purchased the raw material silica exclusively in larger containers. Silica is white, granular and has a slightly abrasive effect. Like many other bulk materials, silica tends to form dust when it is set in motion.

To be more flexible with smaller batches, the manufacturer also wanted to use big bags.

A combined system consisting of two big bag emptying stations was planned for this purpose, which takes consideration to the limited space in the production hall and offers the operating personnel enough room to be able to operate the system easily and, above all, safely.

The actual emptying process is intended to ensure that the big bags are emptied completely in order to avoid unnecessary waste of material. Since the product is first conveyed into an existing weighing container after being emptied, both emptying stations had to be equipped with suitable conveying equipment in the lower discharge area in order to be able to optimally feed the material to the downstream production process.

Due to the abrasive properties of silica, the entire system was designed to be wear-protected with regard to the materials used in order to reduce downtimes due to maintenance as well as the need for spare parts to a minimum.

Dust-tight design for safe and residue-free product flow. It was particularly important to the customer that both the big bag emptying stations and the conveyor technology used enable dust-free operation.

The two big bag emptying stations stand next to each other on a service platform with stairs and side railings. For stable fastening to the hall floor, the support legs were provided with foundation support plates. A crane runway with chain hoist was integrated into the base frames, which protrudes laterally over the frame. This allows big bags to be picked up next to the stations and brought into the device for emptying by remote control. The two loading harnesses each have four safety load hooks for attaching the big bag loops. The hooks are guided by compression springs so that the containers are automatically tightened during the emptying process.

The emptying units also consist of a feed hopper with a manually operated sealing plate. The product guide tube for clamping the big bag outlet is located in the centre of the hopper. The big bag is fixed securely and dust-tight by moving the sealing plate. A nozzle with a suitable cartridge filter is fitted for dust removal from the container. On the side of the hopper is a console to which a roller vibrator can be retrofitted as a flow aid if required. To support the emptying process, both big bag stations were equipped with a pneumatic walker, which ensures that the big bags are emptied quickly and completely. 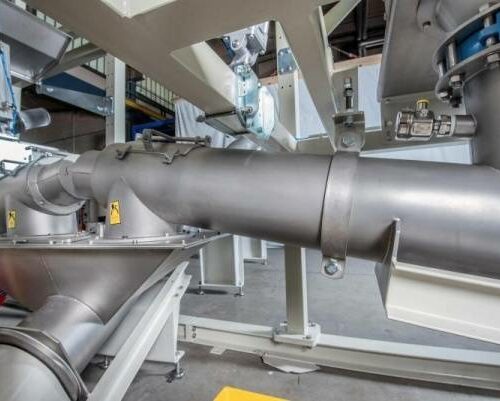 The heart of the system: Discharge hopper with sealing plate and rocking device for dust-free and residue-free discharge of the big bags.

All components that come into contact with the product, such as the feed hoppers of the discharge units or the screw conveyors, are made of high-quality, resistant stainless steel to ensure that the product is conveyed with as little residue as possible.

Below each of the two feed hoppers, a screw conveyor was mounted in an inclined position, which functions as a collecting screw. Both collecting screws convey the silica directly into a third inclined screw with an enlarged inlet spout, via which the on-site weighing hopper is fed. In this way, the product is finally metered into the downstream processing stage. To control the material flow, pneumatically operated butterfly valves were installed at the inlets of the collecting screws and the outlet of the third inclined screw. The connection of the collecting screws to the third inclined screw and the product feed into the weighing hopper were designed as a closed system in order to reduce dust emissions during material transport to a minimum. At the request of the operator, fill level indicators were also installed in all three screw inlets, which trigger an empty message from the two big bags.

In addition to the conception, design and production, Engelsmann took over the assembly and commissioning of the system on site as well as the instruction of the operating personnel. In addition to the low coordination effort and the smooth project flow, the tyre manufacturer was convinced by the dust-free and user-friendly design as well as the low maintenance effort of the system solution.