Industrial sieves for the production of fatty sweets

Rising raw material and energy prices are also putting confectionery manufacturers under increasing pressure. High demands on quality and hygiene on the one hand, and increasing cost pressure on the other, require high process reliability and maximum economic production.

This practical example shows how efficiency and productivity can be sustainably increased in the industrial screening of fat-containing products.

Whether used for protection, classification or oversize screening, sieves only work optimally if they are adapted to the product to be processed. The important thing here is to avoid plug-in grain. Small product particles can get stuck in the mesh of the sieve as boundary grain during the sieving process, so that it loses permeability.

For some applications and bulk materials, this problem can be solved by increasing the mesh size or by installing cleaning systems. However, common ball or ultrasonic cleaning systems quickly reach their limits with fat-containing products such as nuts or products that tend to become electrostatically charged. Often, operators then have no choice but to clean the screen mesh manually again and again, despite the installed cleaning system. Downtimes for costly cleaning work and reduced throughput are accepted as a “necessary evil”.

Engelsmann was confronted with precisely this problem in this project with a well-known confectionery manufacturer who also sieves nuts or nut chips as part of its production processes. 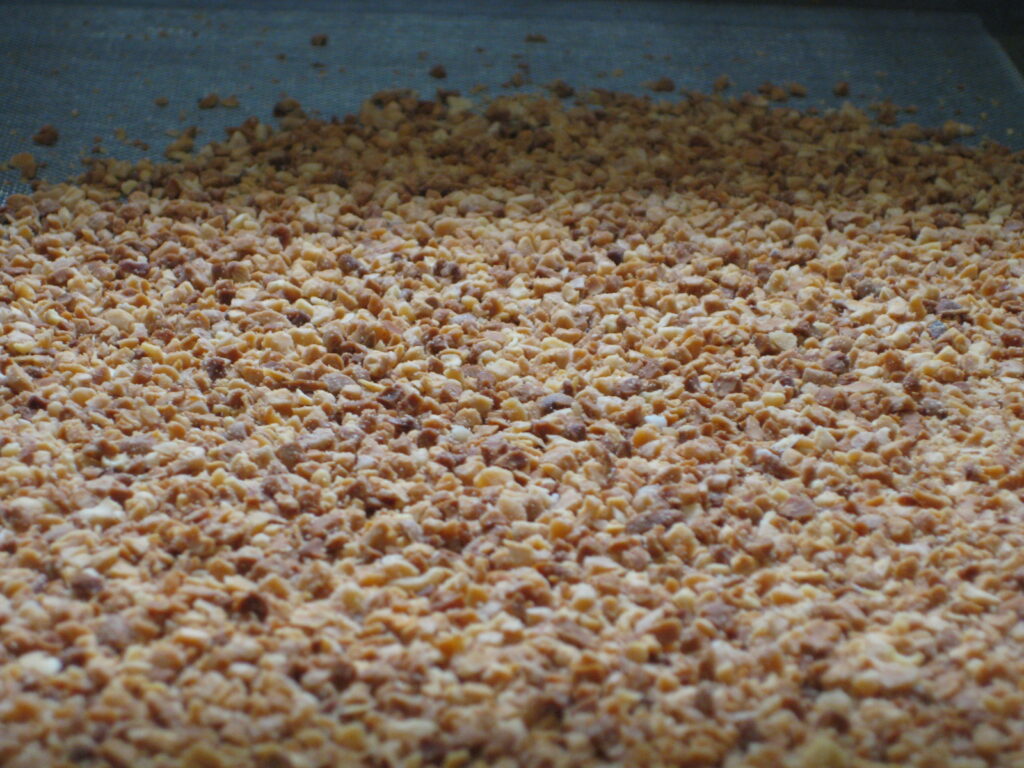 Nuts: taste delicious, are healthy … and cause major problems during their processing in the industrial production process if the screening technology is not precisely adapted to the properties of the fat-containing product.

The company is active as a supplier for the chocolate and baked goods producing industry. A vibration screening machine was previously used for the classification screening of almond and hazelnut semolina, chopped almonds and various other nut products.

However, the screening technology used to date has reached its limits. Above all, recurring problems with screening performance and quality defects in the screened product must be eliminated:

The ball cleaning system of the old machine damages the product during the screening process. The nut splinters are crushed or broken up further and further by the impact energy of the cleaning balls. Waste outside the required grain size is produced.

Moreover, the cleaning system does not manage to keep the sieve mesh permanently free. The fatty nut products clog the sieve inserts again and again in a short time (approx. every 20-30 minutes) and then have to be cleaned additionally – despite the integrated cleaning system.

The closed design and stacked screen decks meant that the old vibration screening machine could only be cleaned with extensive dismantling work. The result: extremely high downtimes, which in individual cases even led to delivery bottlenecks.

Against this background, the company decided to introduce new screening technology. In addition to a screening process that is gentle on the product and protects the quality and consistency of the screened products, the new machine was to ensure the required production volume with the highest possible system availability.

Classifying screening with high throughput, combined with a screening process that is gentle on the product – and also for nuts containing fat, with separation efficiencies of up to 98%

In the first step, performance tests were carried out with the JEL Freischwinger screening machine in the Engelsmann technical centre under the specified framework conditions: With a buffer screening machine specially tailored to the requirements, the deficits of the screening technology used so far can be eliminated.

The JEL Freischwinger screening machine with buffer is used wherever a ball cleaning system reaches its limits when cleaning the screen mesh or where the abrasion of the balls would mean a detrimental effect on the product. In order to be able to realise the customer’s wishes, the screening machine was designed with stop cleaning and in open construction, i.e. with direct access to the screen deck. Six sieve stackers arranged one behind the other, with mesh sizes from 0.1 mm to 10 mm, form a total sieve area of 1.5 m². The nut splinters are classified into four fractions in a continuous screening process.

With a throughput capacity of 1 tonne per hour

The series of tests in the company’s own technical centre showed that a JEL Freischwinger with buffer, which is tailored to this application, not only reliably removes the plugged-in grain, but also works in a particularly gentle way on the product. The nut splinters are no longer crushed or broken. This minimises waste and the nuts are transferred to the downstream process with the right grain size for the end product. 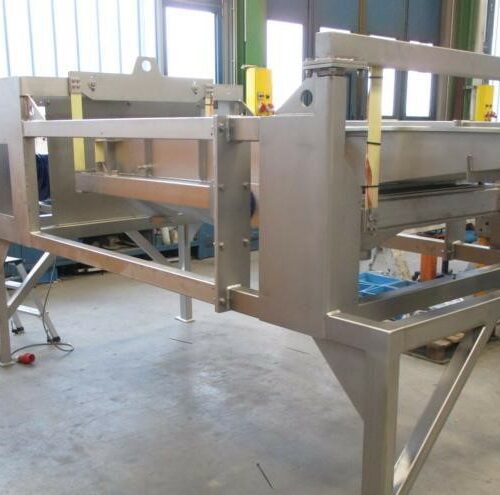 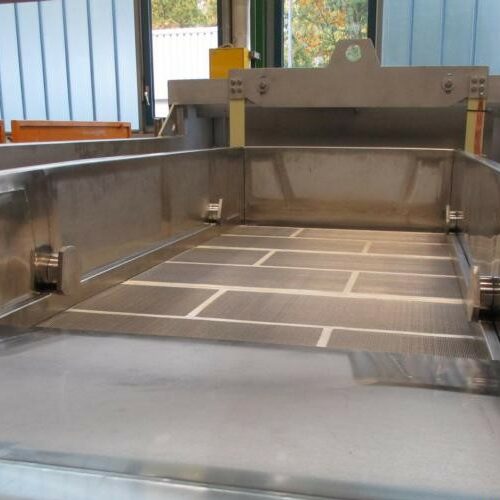 The JEL Freischwinger with buffer cleaning system can be used wherever a ball or ultrasonic cleaning system reaches its limits and damage to the product must be prevented during the screening process.

The screening trough hangs freely on several spring elements in the frame and is set into horizontal oscillation by the drive. In the process, the trough follows the frame with a slight time delay so that it hits the frame as it swings back. To dampen the impact, the frame is fitted with four replaceable plastic buffers. The vibration loosens stuck grain in the sieve meshes. The position of the buffers and thus the intensity of the impact can be adjusted without tools.

The open design allows the screen fabric to be cleaned while the screening process is running. If necessary, product residues can simply be swept off the screen insert with a hand broom without having to shut down the screening machine.

The sieve trough itself can also be cleaned with little effort. For this purpose, the sieve inserts held by pressure bars are dismantled with the help of quick-release clamps. Now the space under the inserts is freely accessible for cleaning and disinfection. This also makes any repairs or maintenance work much easier.

The intensity of the cleaning can be individually adjusted via the buffer system – without tools. The free-swinging sieve system with the stop of the sieve trough means that the sieve mesh now remains fully permeable for 1 hour, twice as long as before. This means less cleaning effort and shorter downtimes. The higher plant availability now enables the customer to achieve a sustainable increase in productivity.

With the JEL Freischwinger tailored to the product, the confectionery manufacturer was able to decisively reduce downtimes. The throughput capacity was increased from 90 to 300 kg/h. The cleaning system works so effectively that one less employee is needed to operate the classifying screen.

Low-energy operation with low life cycle costs
For resource-saving machine use, the 850 kg screening machine with buffer is equipped with a specially developed flywheel drive.

Thanks to this flywheel drive, which is based on mass balancing, hardly any vibrations are transmitted from the machine to the environment. In contrast to other drives, the flywheel drive is also very low-wear. Compared to the previously used screening technology, this significantly reduces material usage and maintenance costs. In addition, the flywheel drive is much more energy-efficient. This is important – especially for heavyweights, such as this JEL Freischwinger for classifying nuts.

The JEL Freischwinger is driven by an electric motor that transmits its power by means of a V-belt to a flywheel mass equipped with push rods. The flywheel mass is precisely matched to the mass of the sieve trough. The drive train (shaft and flywheel) weighs about as much as the sieve tray, including the nuts.

The motor drives the mass at full power for about 15 seconds. Then the classifying screen is kept moving with only 10-20% of the nominal current. In the process, the electrical energy is converted into rotational energy, stored in the flywheels and then gradually released. Thanks to this flywheel drive, which is based on mass balancing, not only is little energy consumed (0.75 kW at 1.5 m²), but the screening of the nuts is also much quieter than before. 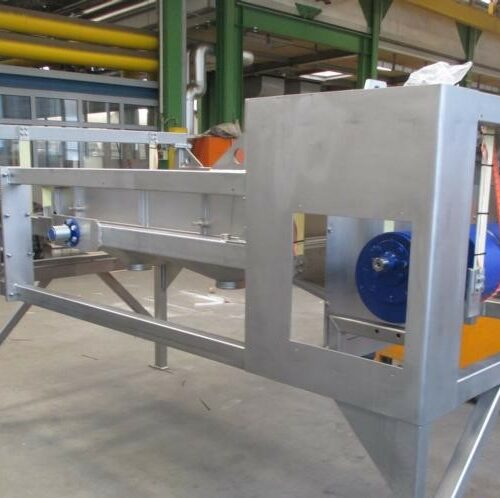 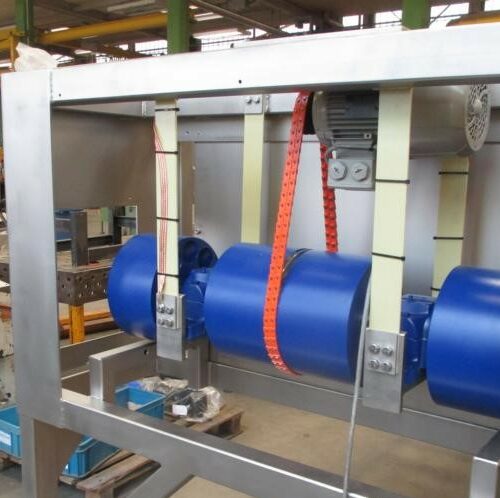 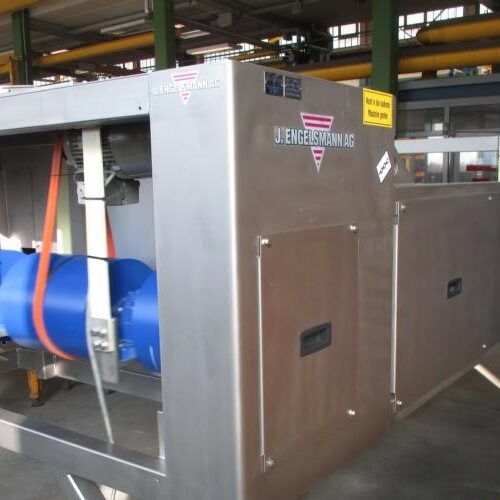 High performance and energy efficiency: The JEL Freischwinger as a screening machine with buffer and swing drive for clean classification of nuts and other fatty products.